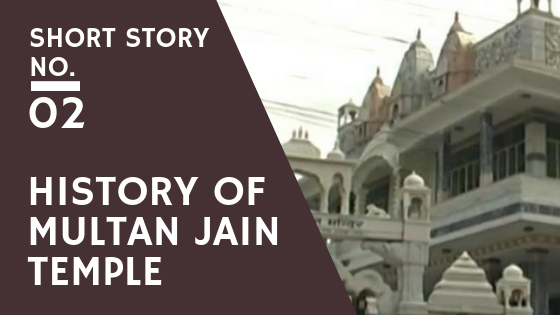 This story is taken from the lectures of Bal. Br. Shri Sumat Prakash Ji.

This story dates back to the time when India and Pakistan partitioned in 1947. There were riots all around. Trains and buses going from India to Pakistan or Pakistan to India became moving cemetery on reaching the end.

There was a Jain temple located in Multan, Punjab which is now in Pakistan after partition. The Jain community was worried about moving the idols from Multan to India. They could not travel by bus or train route to India nor they could stay in Pakistan due to the riots.

Some people from the community traveled to Delhi to get a plane on rent. But they could not succeed so they traveled to Bombay. They finally got a plane from a private company on the rent of 400rs per person. (You can imagine the value of 400rs of that time)

The plane was loaded with 85 idols from the temple, all the Jinvani, household items along with the people. It became overloaded. The pilot denied flying it saying that it was double loaded. He suggested taking 2-3 idols only saying that all the idols look alike.

All the women got down the plane crying and saying that leave us here but take all the idols and Jinvani. On removing all the household items, the plane was still overloaded.

The pilot said that either the people can go or the idols. The people told him to take the idols. The pilot was surprised to see such a belief of people. He thought that if he left them in Pakistan, they are going to die anyway. He took the risk to take idols as well as people both.

The plane finally departed. Everyone chanted the namokar mantra. At that time, Women in the plane took the pledge to not eat food or drink water till the plane reach Jodhpur. The plane successfully landed at Jodhpur airport.

The pilot was surprised that a double loaded plane flew so smoothly without any difficulty, safely. The pilot said that he has never flown such a plane which felt so light despite being so loaded. It was a miracle. The pilot asked the people to show him the idol otherwise he will not let them take the idols from the plane.

The pilot was Sikh. Jain people asked him to leave non-veg, drinks before he could view(darshan) the Pratima of the Lord who is a preacher of non-violence.

The pilot immediately took an oath to not eat non-veg and have drinks in his life and bowed to the idols finally.

These idols and Jinvani is located at the Adarsh Nagar, Multan Jain Temple in Jaipur. You can visit it. Pandit Shri Todarmal Ji’s famous “Rahasya Purn Chitthi” is written to sadharmis of Multan.

Thanks to Anubhav for PPT.