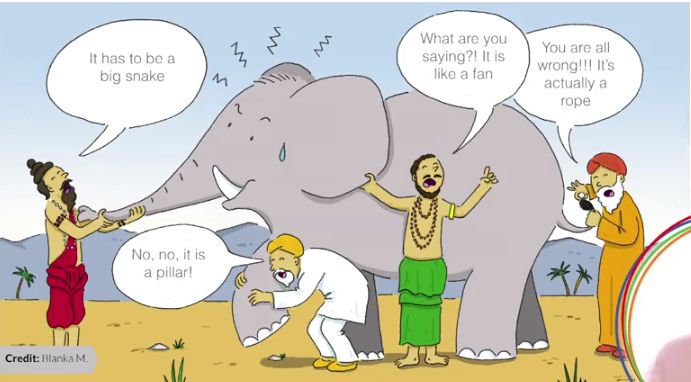 Jainism is defined by its three principles in the world “Non-violence”, “Anekantavada” and “Syadvada”. Though this world praises the concept of Non-Violence when talking about Jainism, most of the people(even Jains) have misunderstood Anekantavada and therefore, Syadvada.

You will find various names of Anekantavada like non-absolutism, many-sidedness, non-one-sidedness or multiple judgments. Even though practicing Jainism for many years, I never really read about this great philosophy of non-absolutism.

Once someone argued with me, “The philosophy of Anekantavada of Jainism states that the everyone in this world is right in one way or other. No one is absolutely wrong. Hence, both of us are right.”

That day some thoughts came into my mind that how a person’s belief of believing in violence can be right. Anekantavada can’t protect someone doing wrong in the name of judgments. Something felt fishy and wrong in the understanding of this theory.

Hence, I decided to dig deep into the great concept of Anekantavada. After reading this book on Anekanta & syadvada by Dr. H.C. Bharill, many of my misconceptions were cleared.

Let’s take a brief look into this philosophy as seen by me. I am thankful to Sulabh bhaiya for making me understand Anekantavada with his simple yet helpful examples.

Meaning of the word “Anekantavada”:

Anek = Many (two or infinite)

The way of saying what is been interpreted by Anekanta is called Syadvada. This will be discussed in detail in the next articles.

Suppose there are two people A and B with a mango. They see the mango as following:

Here both of them are correct. A is talking about the color of mango while B is referring to the taste of mango.

This is Anekantavada where the judgment of A and B matches the real attributes of mango. None of them is lying because if we look at the mango, it is yellow in color, sweet in taste, juicy in nature and many more.

Example of NOT Anekantavada:

Again, A and B talks about mango with different judgments:

Now you already know what’s never possible at all. The mango can never be blue in color. Hence, A is wrong here in telling about the color of the mango.

That’s what is NOT Anekantavada. A false statement about a substance is never the right judgment about it.

Let’s see another common example of misconception in the theory of Anekantavada:

According to A, this mango “may be” yellow but the truth is the mango is yellow in color. Similarly, B says that the mango “may not be” bitter but a mango can never be bitter in taste in reality.

“Maybe” or “may not be” are two phrases that are used by those who have not understood Anekantavada completely.

Whatever is said about a thing with different judgments in Anekantavada is always a relative truth. There is no point of doubt or “maybe” in saying something with Anekantavada.

There can be two ways of saying a statement about characters of a substance:

Whenever we use ‘only’ in our statement, we are certain that the substance is only that way as per that judgment.

When ‘also’ is used, it is to be understood that the statement is true from some judgment but there are also other truths about the substance which are not mentioned in this statement.

A: The mango is ‘only’ yellow in color. It can never be sweet or ripe in color.

B: This mango is ‘also’ sweet. It also holds yellow and ripe properties from other judgments which are not mentioned in the statement.

The above statements can also be changed like these to still hold Anekantavada:

Below statements will be incorrect :

A’s saying that the mango is also yellow in color depicts the mango can be red, blue or pink in color. Hence, this statement will be wrong. Either the word ‘also’ or the judgment ‘in color’ has to be removed from the sentence to make it right.

B’s saying that the mango is only sweet means the mango hold only one property of being sweet. It doesn’t have the properties like yellow color, ripeness, etc. Hence, this statement is also wrong. Either the judgment ‘in taste’ has to be added or ‘only’ should be replaced with ‘also’ to make this sentence right.

This theory of non-absolutism is the core of Jainism which makes it different from other religions. It should not become the theory of doubtfulness. I have tried to summarise this doctrine but still, I hope the reader to not stop here and read more about Anekantavada. I will be discussing more Anekanta and Syadvada and how they can help in real life in my next articles.