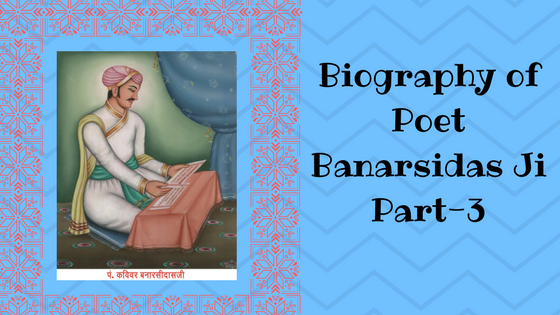 In the last two episodes of this series, we saw a glimpse of the poet’s worldly life as a childhood and youth. Let’s see a glimpse of his spiritual life in his own words.

In 1680, at the age of 37, the poet got the company of ‘Arthmal ji Dhore’. He inspired him to read the commentary of ‘Samaysar’ written by Rajmal Ji Pandey. The poet read it with great passion, but he did not understand the spirit of spirituality and became one-sided. As a result, his tendency increased towards pure determination while outer things seemed to be very thin to him. He left worshipping, chanting and penance and focused towards soul only. The result was that people started calling him ‘Khosaramati’ i.e. a follower of an unbalanced religion. The poet spent 12 years in this way.

One day, fortunately, he met Pandit Rupchand Ji Pandey. On listening to his lecture on Gunasthan Vivechan, Banarsidas Ji understood the combination of knowledge and action, that is, the combination of determination and behavior. The true nature of the principles, multiplicity, etc. is understood by him. Now he didn’t consider outer world activities as completely deniable, but they seem useful in the path of autism. After this, the poet’s heart became calm and steady. Even after having been from the Shwetambar sect, he not only firmly persuaded the Digambar sect but also accepted it. Later, the spiritual spirit of the poet became so strong that in 1693, the play was tied in beautiful verses in the form of timeless, and timer staged the stanza of the drama. This spiritual book of the poet became so popular that talk of samaysar started in every house.

From the eleventh century, the Jain Saints became almost negligible. Till the time of the poet Banarasidas ji, people used to read Digambar sadhus only in the Puranas and used to guess only about the actions of the saints. At that time, the reins of religion were in the hands of the material things containing Bhatkarkas. Outer world activities were announced as religion and people have forgotten spiritual talks.
The words of Bhattaraks were considered as the words of religion.
The poet Banarasidas was very intellectual and had studied the Jain scriptures very well, so he quickly understood this delusion. He came forward himself and strongly denied the validity of these materialistic things and the affair, and kept the real form of religion before the public.

Although there is no concrete information available about the poet’s posthumous date. But a legend is famous in this regard that in the end, his throat was stuck. Because of which he was not able to speak. He realized that his death is near so he engrossed in himself.
People understood that he is now a guest of two-four hours. But when the time went out and he didn’t die, the people around him started saying that maybe the life of the poet is trapped in the love of the family. Some people started to say that even after running behind the wealth, he had not received the money, it seems that his life is still stuck in it. He won’t die until he will get a bag of money.

The poet Banarasidas Ji got distracted by these stupid talks of the people, but he was so powerless that he could not speak but indicated the people for a writing pad. After a great effort, people understood his indications and gave him a writing pad. The poet wrote the last verse of his life after getting the writing pad, which changed people’s perception completely. The verse was like this:

Four poetic compositions of “Poet Banarasidas Ji” are available today, which are still presenting their poetic talents and knowledge today. They are as follows:

It is a poetic collection, in which there are 175 verses. This is the first creation of the poet which was written in Jaunpur in Ashwin Sudi on Monday, in the year 1670. The poet himself writes about the creation period :

In this book, there is a compilation of compositions composed in various verses on various topics from time to time by the poet. In this religious poems, spiritual poems, translated poetry and sermon poems are collected.

This is the third composition of the available compositions of poet Banarasidas ji. This is the first “autobiography” * written in the Hindi verses in all Indian languages. The poet has presented it in 55 years of his life with very simple, concise and truthfulness manner. Describing the reason for keeping the name of this masterpiece “semi-narrative”(ardhkathanak), the poet says that the present age of human beings is assumed to be 110 years and the book has the story of 55 years so it fulfills its name. The way poet has described his mistakes and failures in the simpler, straightforward and clear words that after reading it, many reverences fall in the footsteps of the poet.
इस कृति में आत्मकथा के साथ-साथ ऐतिहासिक , सामाजिक , राजनैतिक स्थिति का भी ऐसा उल्लेख किया है कि जिनसे आज भी इतिहास के कलेवर में एक सुंदर अध्याय और जोड़ा जा सकता है।
In this work, along with autobiography, historical, social and political situation has also mentioned that a beautiful chapter can be added to the art of history.

The ‘Natak Samaysar’ is the best spiritual and popular composition of the poet. Such a clear explanation of purity principle is rare elsewhere. The representation of the purest state of the soul is done with very clear and logical directing the true nature of the world.

This book has 310 dohe-soratha, 245 savaiya ikateesa, 86 chaupaee, 37 savaiya teeesa, 20 chhappay, 18 kavitt, 7 adill aur 4 kundaliyaan. In this work, the poet has made charaters from thoughts. These seven elements are the characters to act as soul, non-soul, influx, bondage, stoppage, shedding and liberation. The drama(natak) word has been added to it because of its dramatic depiction of the expressions. The ‘samaysar’ word is for the soul itself, in this way the name of this work is called ‘samaysar natak’.

It is self-evident, being the basis of the three texts mentioned above, this work is not a fundamental work of the poet Banarasidas ji. But the poet has made this work so fascinating with his poetic talent, that the work appears to be more interesting than the original one. By making beautiful illustrations on every line, it made it even easier. His composition is incredible in terms of poetry.

The poet did the render the subjects which were not in the original texts. The poet, who did not have the proper knowledge of the Gunasthan and remained in the dark for 12 years, has himself described these Gunasthan in very detailed and beautiful manner.

In every sense of Language, Quote, Subject and Rendering style, this work is unrivaled. Being a spiritual poet, he gave paramount importance to the realization of the soul(Atmanubhuti) everywhere. Self-realization is not the only path to salvation, it is salvation itself. Poet Banarsidas Ji writes:

Just by saying the experience, the soul does not get confused in the temporal experience, so also the nature of experience is also clarified:

By ‘Vastu’, the poet meant the soul and ‘Ras Swad’ means self-realization. That is the experience of the happiness of the soul is the real experience.

This masterpiece was composed on Ashwin Shukla, Trayodashi, Sundays, Samvat 1693. This work was completed in Agra during the reign of Shah Jahan.

The poet always gave importance to knowledge rather than external activity. He believes that ‘gyaan bina shivapanth na soojhai‘. He writes:

Here the poet didn’t mean bookish knowledge or brainy knowledge, but it is meant to be knowledge of knowing soul and body different because this knowledge is the soap that can make the soul pure.

It is meant to say that ‘Natak Samayasar’ is the best creation of the poet which has brought him to the level of ‘Acharya Kundkund’ and ‘Acharya Amrutchandra’.

In this way, we can say that poet Banarasidas Ji was an extraordinary personality. The literature written by him is the backbone of spirituality, his place will always remain intact in the spiritual world.