The life of Poet Banarsidas Ji was full of ups and downs. The instinctive combination of the virtue and the rise of sin that can be seen in his life is not found in the life of any other great person.
The poet faced many difficulties in his life, yet the creation of so many spiritual texts is an inspiration for the poet’s patience. Whoever reads his life journey, he/she is obliged to think once that even though there was such a sharp rise of adversaries, how was he so intuitive and simple-hearted?

Let’s know his life journey in his own testimony.

There is a village named Biholi near Rohtakpur in central India, there was a colony of Rajputs of the first dynasties. One day a Jain Saint arrived in that village. All the people accepted Jainism on being influenced by Muniraj’s holy character and simple nature and teachings.

In the words of Poet Shri Banarsidas Ji:

There are many religious and scholar men in this famous tradition of Biholia family. One of these was Muldas, who was the patriarch of “Poet Banarsidas Ji”. Muldas Ji had two sons named Khadgasen and Ghanmal. Unfortunately, Ghanmal died at a young age of three.
Muldas Ji could not endure the son’s death and he died.
After his departure, his devoted widow came to his father’s house with his son. The time passed away slowly and one-day Khadgasen was married to the daughter of Meerut’s “Surdas Ji Shrimal”. In the year 1635, “Khadgasen” was blessed with a son who filled the house with the happiness. But after ten days, the son died and all the joy turned into weed.

In the year 1637, Khadgasen went to visit Sati with the desire to get a son. But unfortunately, he was robbed by thieves on the way. In this regard, poet Banarsidas Ji had written:

The conclusion of above is “How strange are the thoughts of human beings, that even after bearing so much grief and disappointing rupture (fruit), his greedy mind doesn’t accept it?”.

In the year 1643, Khadgasen traveled to Sati again in the desire of son. This time his desire was fulfilled. After eight years, he was blessed with a son again and celebrated it immensely. These verses are visible in connection with their birthdate and birth name – 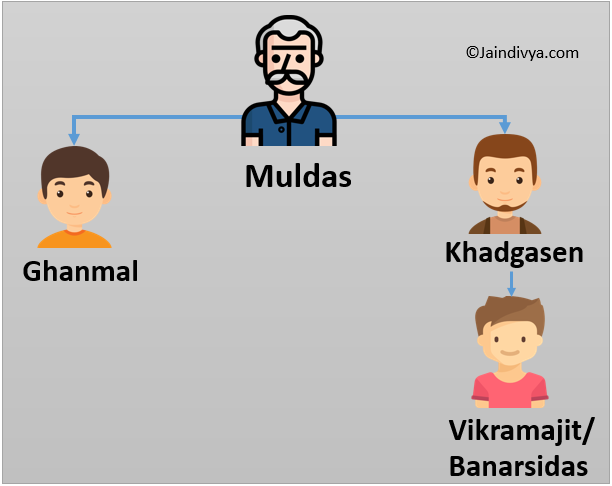 How did he get the name ‘Banarsidas’?

When the child Vikramajit became six-seven months old, Khadgasen went to visit Parshvanath along with the family. He worshiped with great devotion, and kept the child at the feet of the Lord and prayed for longevity –

A priest was standing at the temple that time, he faked his focused and said, “The yaksha of Lord Parshvanath has indicated me that this child will be a long life.”. He said the following about the name of the child:

Khardgasen gave his son’s name Banarsidas assuming this illusion of the elusive priest to be right. The kid started growing like the new moon gradually. But in the short life of five years, Banarasidas Ji was surrounded by sangrahani (a disease). He became fine after suffering from great pain for one year but he again suffered from chicken pox. In this way, he spent his almost two years in a great pain.

Despite being disheartened by the fatal disease, the child “Banarsidas Ji” was sent to the Guru’s ashram for the education.
Due to the intellectual property of Banarsidas Ji, he gained sufficient knowledge in a short period of time. In the words of the poet:

It was only a year since he was educated that in the short life of 9 years, “Banarasidas Ji” got engaged. After two years in 1654, he got married. Although there was no time for studying due to family responsibilities after marriage, the poet studied the works of Anekarth-Naammala, Astrology, Alankar etc. even after the age of 14. Later on, he studied various scriptures written by ‘Bhanuchandra Ji’, the intense scholar of spiritualism.