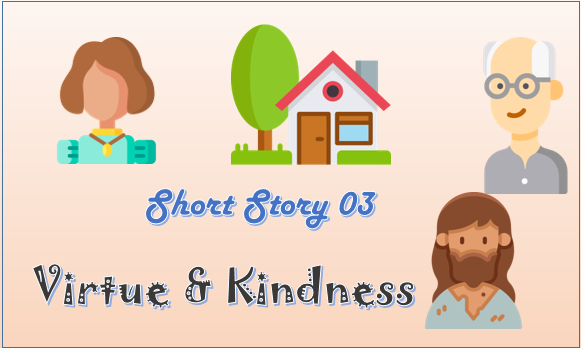 There was a girl named Vinita who grew up in an ethical family. She was courteous to elders just like her name. She considered serving others a fortune. She followed a healthy, active and hygienic lifestyle. She pursued philanthropy along with her studies. She was everyone’s favorite naturally.

She got married into a rich but miser family where there were no donations or charity given.

One day a hungry, helpless and impotent old man came on the door. Daughter-in-law saw him and gave stale bread.

The old man said, “Daughter, I won’t be able to eat this.”

Daughter-in-law replied, “Sire! Only stale is eaten in this house.”

Impressed with daughter-in-law’s care, courtesy, and conscientiousness, the father-in-law standing there said, “Daughter, why do you say so?”

Daughter-in-law replied, “Father! I have seen the tradition of enjoying and multiplying the wealth acquired from the former virtue in this house. I have not seen charity, virtue or religion.”

Father-in-law realized his mistake. Then, the daughter-in-law served good food to the old man and inspired him to be on the right path. After getting his introduction and knowing him to be a truthful person, they gave him an attic near the house to live in.

The elderly man also began to cooperate with the grateful spirit in the household chores. He used to play lovingly with younger children in the house. He used to talk good with them, make the older children recite good books and live happily. Due to daughter-in-law’s good sense, the family got a trustworthy servant.

One day, he caught the fever. Thinking about Lord and soul being different from the body, he left the body.