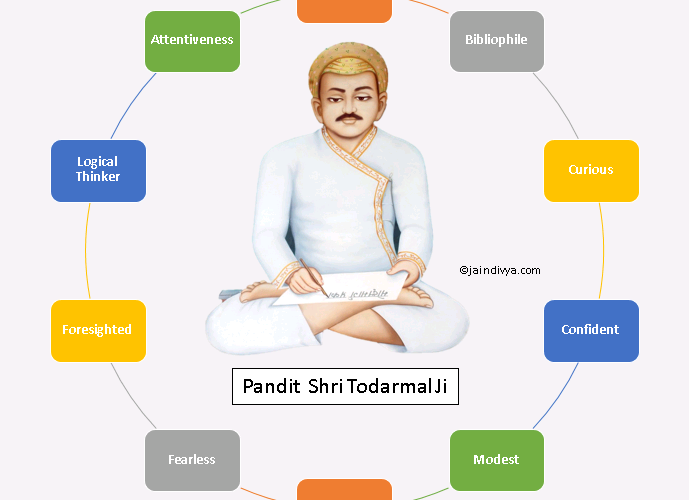 Let’s turn around the pages of history and try to feel the story that looks to have a sad end but is really the story of a true devotee who can never die.

Around the end of the eighteenth century, Shri Jogidash Ji and Shrimati Rambha Devi Ji were blessed with a child in Jaipur. They named him ‘Todarmal’. This child was brilliant, detached from the world, bibliophile and kind in nature without any ego of his knowledge. (Keep reading to know justification of these adjectives)

His education was done through big groups(called Sailey,सैलि) in Jaipur which was led by Baba Bansidhar. After that, Todarmal Ji also led this group. He was a self-learned person. He knew to read and write in Kannada besides Hindi, Sanskrit, and Prakrit.

He spent most of his life in Jaipur. Although he went to Sinaghana where he worked for a moneylender for some time.

Nothing written has yet been found about his wife and in-laws. He had two sons, namely Harishchandra and Gumaniram. Gumani Ji resembled him in brilliance.

One of his fellows, Br. Raimal Ji has written about him. He has mentioned how 1000–1200 people would gather to listen to Pandit Ji. Pandit Ji would also read Kannada books like Dhavala and Mahadhavla which people would only worship from years.

Pandit Ji was kind enough to write the meanings of the books in the local language of that time(dhundhari) which were difficult to understand by the people. He wrote the following:

Now you know why I called him bibliophile. He has used verses from many Jain scriptures while writing his own books. Only a person who has studied something can write about it confidently.

Some of the books like Gommatsar, triloksar, labadhisar belong to Karnanuyog(that which deals with the karma philosophy, geography and maths of Jainism) which need to be understood by someone with great concentration. A brilliant mind like Pandit Ji can read all of them and dare to write a summary of them in the form of Samyag Gyan Chandrika.

If someone would ask Pandit Ji for his introduction, he would have replied in the way he introduced himself in Samyag Gyan Chandrika:

The above writing shows his detachment even from his name. He says that everyone calls this body as ‘Todarmal’ but I am a soul.

As I have already mentioned the popularity of Pandit Ji, I would like to add to it by mentioning “Rahasya Purn Chitthi”. This letter was written by Pandit Ji as a response to the letter came from Multan(now in Pakistan). However, the letter for which Pandit Ji would have replied is not found yet. This is not an ordinary letter but a small book in itself which is studied in swadhyay(self-study).

So, the popularity of Pandit Ji was across the country and people would ask questions through letters.

Though Pandit Ji was so popular and has written great books, yet he had no ego. He writes that I have not done anything. Reading and writing is an act of Pudgal. The letters are formed by the combination of ink with paper. Read it here:

Pandit Ji would write Mokshmarg Prakashak and read it in the everyday gatherings. He was brave enough to write about the flaws of other religions as well as wrong traditions in Jainism with his logic.

Some people didn’t like this. They asked Pandit Ji to remove some parts from Mokshmarg Prakashak but he denied. They even threatened him to death.

Some mischievous people removed a shivling from the temple and blamed Pandit Ji. The king was a follower of Shiva. He ordered to crush Pandit Ji under the foot of the elephant.

It is said that the elephant was not lifting the foot even after being beaten. Pandit Ji told him to do his work without any worries. Then only he lifted his foot.

Here is How I Got Inspired By Pandit Todarmal Ji? Believe me, I can write a book on Pandit Ji and it would still be less. He was a gem which we lost but I still find him alive in his writings. Mokshamarg Prakashak should be the book one must read before they die. 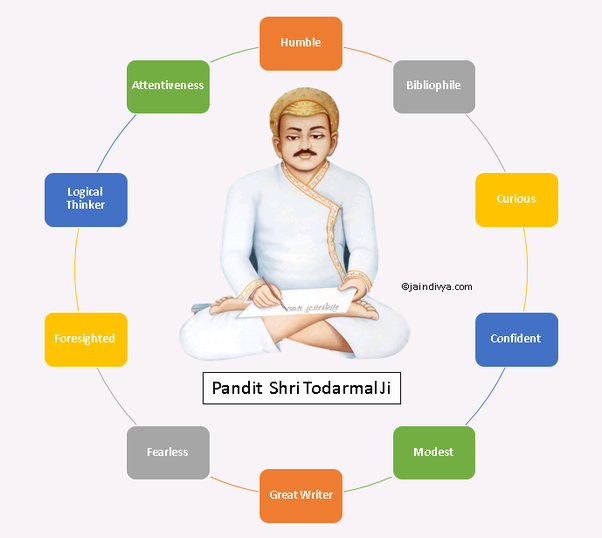 You can watch the lyrical story of Pandit Ji here:

The 10 Top Quotes by Pandit Shri Todarmal Ji can be read here or you can watch the video here: