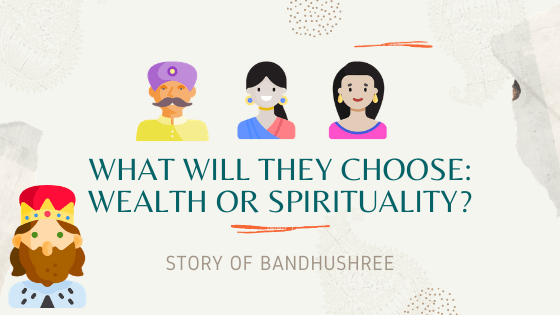 In today’s world, when people get their daughters married to anyone seeing only their wealth; or when daughters flee away in the name of love without considering anything else; here is a story of a family who couldn’t be lured by money or fame. I hope after reading this story of Bandhushree, at least one person will rethink before getting their daughter married to a heretic or a daughter will reconsider marrying someone who is not a follower of Jainism.

A prosperous Jain family lived in Ujjain under the kingdom of king Vishvandhar. Gunpaal and Dhanashree had a beautiful daughter named Bandhushree.

One day the king was going to the forest. On the way, he saw Bandhushree playing with her friends. He fell for her beauty and wanted to marry her. He called a maid to convey to the father (Gunpaal) without further delay that he wanted to marry Bandhushree.

The maid told Gunpaal that the king wanted to marry his daughter and that she will become the queen.

Thinking all this, he sent back the maid with sweet words.

He wanted to know the thoughts of his wife. So he called her and said, “We are so lucky. The king wants to marry our daughter. Now, Bandhushree will become the queen. We shall get her married her soon on an auspicious day.”

Being unfamiliar with the actual intents of her husband, Dhanashree said, “O dear husband, what has happened to you today? What are you talking about? King Vishvandhar is a heretic. I can’t see my daughter getting married to him. Do you want to send your daughter to hell? Your daughter is so religious. If she gets married to a heretic, she will never be happy. It’s like throwing her in front of a lion/tiger. How can you be fascinated by wealth? Those who leave Jainism seeing temporary grandeur, they leave the gem on seeing the beauty of glass. You think yourself, I can not give you a lecture. You are more intelligent than me. I have just presented my thoughts to you. Rest your order is my command.”.

On listening to these thoughts of her wife, Gunpaal said, “O dear! I am very delighted to hear your thoughts. I wanted to test you. I am not in the favour of getting our daughter married to a schismatic. Now we should call Bandhushree and ask her thoughts because it’s important to know her thoughts on marriage”.

Gunpaal called Bandhushree and affectionately said to her, “We are so fortunate that the king himself has sent the proposal of marrying you. Soon after marriage, you will become the main queen. We are so lucky that we have got a daughter like you.”.

After hearing such words from her father, Bandhushree said regretfully, “Father, Pardon me. What has happened to you today? You want to lure me in worldly pleasures. You want to destroy my spirituality by getting me married to a schismatic. I am not greedy for desires. To sell your religion for pennies is not intelligence. I have gotten this Jainism due to a great fortune. Don’t you want my well-being? This wealth is like ashes to me. I would prefer to die instead of getting married to a heretic.”.

Saying all this, she started weeping. Gunpaal on seeing her strong belief said to her, “O dear, you are great. I am proud of having a daughter like you. This was a mere test which you have passed. Till I am alive, I will not let your marriage happen to a skeptic.”

Gunpaal started to think that by living in the kingdom, the king would forcibly marry his daughter and punish them for not accepting the proposal. Hence, it was better to leave the city to protect his daughter.

When the king got to know that Gunpaal left his wealth as it is and took her daughter, he thought that that religious person did not find it suitable to marry his daughter to a heretic. Hence, he left everything overnight. How wonderful this Jainism must be! I have destroyed my life serving kudharm (false religion). Then, he sent troops to search for Gunpaal and his family.