He was born in Hansi(Hissar), Haryana in 1816 in the famous Kanungo family. Due to his knowledge & intelligence, he was at a good position in the court of Mughal emperor Bhadurshah Jafar.

In 1857, the Mughal emperor assured Hukumchand ji to help in fighting against the British but the help did not reach him and his small army had to fight the British with his simple weapons. Even after this event, he was not discouraged and continued to look for methods to overthrow the British.

Lala Hukumchand & his colleague Mirza Myner Baig wrote a secret letter to Mughal Emperor in Farsi requesting him for the weapons and help for fighting British. During this time, the British captured Delhi and found the letter with the signatures of Lala ji & Baig.

Both of them were arrested including the 13 years old nephew of Lalaji, Fakirchand. The court freed Fakirchand.

On 19th January 1858, Lala Hukumchand ji & Mirza Baig were hanged in front of the house of Hukumchand ji. The nephew, Fakirchand was hanged forcefully by the Britishers.

The Britishers were so raged that they did not give the dead bodies to their relatives. Instead, they buried the body of Hukumchand ji and burned the body of Mirza Baig to hurt the religious feelings.

Present: In honor of Lala Hukumchand Ji’s memory, the Municipality of Hansi has built a park on his name & laid his statue in it. 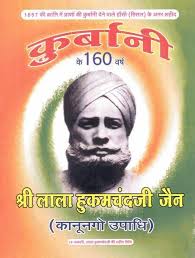 He was appointed as the main treasurer of the treasury of King Sindhiya in Gwalior. The treasury was known as the ‘Gangajali’ and even the Sindhias had no idea of the amount of money inside this. It was the tradition of Gwalior kingdom that no king can see or take the money from Gangajali, they can only add to it. Only the treasurer used to know about this enormous wealth.
Once a soldier asked Amarchand ji to fight in the battlefield for mother India. Amarchand Ji replied that he could not fight with weapons due to his physical oddities but he would do something that will increase the courage of freedom fighters.

When the Rani Lakshmibai was fighting the battle against Britishers, her army was in bad condition due to the lack of food. The soldiers had not received their five-month salaries.

At that time, Amarchand Ji opened the treasure for the soldiers. He knew the consequences but if he had not helped the soldiers, the situation could not be imagined for the fighters.

After four days of the oblation of Rani Lakshmibai, Britishers hanged Amarchand Ji in the crowded market of Lashkar on 22 June 1858. His body was kept hanging for three days with the neem tree to give warning to people.

Present: A statue of Amarchand Ji Banthia has been installed at that place in Gwalior. 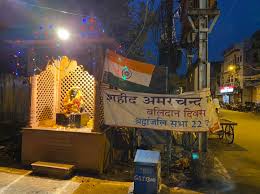 In 1933, Mahatma Gandhi came to Damoh. Premchand Ji walked 16 km to Damoh to listen to him and stayed in Damoh for participating in the freedom fight.

The second world war had started. The deputy commissioner of Sagar, Farookh came to Damoh and started addressing almost six thousand people for admitting to the army. Premchand Ji came forward during the lecture and started saying that this army is fighting the battle for the British and they do not want to help them.

Premchand Ji said in this speech, “This war is fought for the security of the British government. This is a ploy of the English. Hence, no one should admit to the army or help them in any way.”.

Due to the lack of police security, the deputy commissioner had to go away that day.

Premchand Ji was arrested for giving a speech against the British Empire on 14th January 1941. He was sentenced to prison for four months. After some days of being in Sagar prison, he was transferred to Nagpur prison.

Unfortunately, the deputy commissioner Farookh was also transferred to Nagpur Jail. On seeing Premchand Ji, he remembered the insult he faced in Damoh. He insisted Premchand Ji for having food on the last day of his sentence. Premchand Ji knew that the food being served is his death.

He was given the ticket of Damoh from Nagpur. As he reached his home with a weak body, the doctors said that the poison has taken over his body. It was not possible to save him.

Note: Will be adding more names & stories to this list in the Future. For any suggestions, please comment below or reach me on telegram @jaindivya.