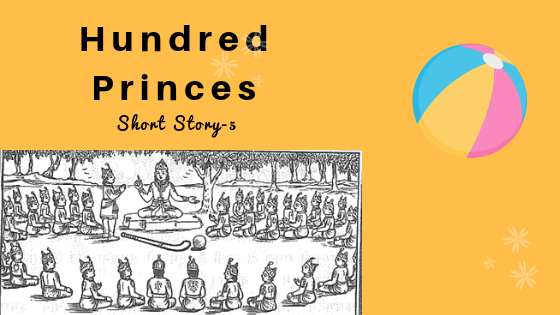 This is a story during the time of first Tirthankara, Lord Risabhdev. At that time, chakravartin Bharat used to rule the land. Jainism was in great influence. Many kevalis, Jain Saints and religious people used to move on this land.

Bharat had many sons who were charming like Indra of heaven. But they all knew it that this beauty is of the body and not the soul. The real beauty of the soul is from religion. The princes of Bharat were religious. They knew about the soul and were destined to attain salvation.

Once small hundred princes went to the forest to play with a ball. The princes were intelligent and detached. While playing they used to think that “Oh! This soul is wandering in the world(four gati) on being hit by the stick of affection/moh just like this ball. Now, we will liberate from this world by self-realization. Our grandfather Rishabh is kevalgyani Tirthankara. Father Bharat is also going to attain salvation in this birth. We should also attain liberation and become God.”

(Look! These small children are thinking so spiritually while playing also! Blessed they are!)

After the game ended, the princes started a religious discussion(tattvacharcha) there itself. The eldest prince was Ravikirtiraaj and the younger prince was Suryakirtiraaj. The prince had so much diligence towards the religious discussion that he could do it for the whole day without any tiredness. The elder brother would ask him a question and he would answer it. All other princes were listening. The delightful discussion was going on-

Elder Brother: How much joy did we get on playing with this ball?

Younger Brother: We can’t get happiness from this.

EB: But we enjoyed playing?

YB: That was the mirage of joy of attachment. The real happiness of the soul isn’t there.

EB: Why can’t we get happiness from the ball?

YB: Because it doesn’t have happiness in it.

EB: Why doesn’t it have happiness?

YB: Because it is non-living(ajeev). Non-living things don’t contain happiness/joy.

EB: Then, what has happiness in it?

YB: Happiness is in the soul.

EB: What is the difference between the soul and the ball?

YB: The soul has knowledge; the ball doesn’t.

EB: So, does this world has two categories of substances?

EB: Does the soul has something else besides knowledge?

YB: Yes, the soul contains happiness, bliss, energy, besides knowledge. The soul has infinite qualities like these.

EB: This ball is non-living and it doesn’t have knowledge. Will it have some other attribute or not?

In this way, the princes became happy by discussing Jeev-Ajeev. Thinking about them, they went back home.

Moral: Don’t wait for the perfect time to do Bhed-Vigyan(thinking about yourself as soul and not the body/other things). It is a practice of every day during every activity of life.