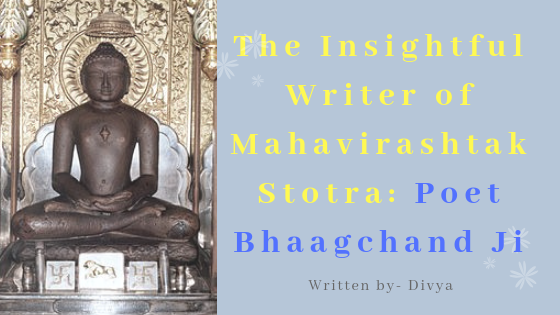 Pandit Shri Bhaagchand Ji was among the self-esteemed persons. He neither told anyone about his pains nor laid hands in front of anyone.
Pandit Bhaagchand Ji was the guardian of the library at Shri Digambar Jain Temple, Nankupura Mandsaur. Some goldsmiths felt bad because Pandit Ji did not allow them to take the scriptures at home to read. He gave more protection to handwritten copies(manuscripts) because of their rarity. The goldsmiths also opposed him by sending letters in the whole country. He writes about the difficulty and rarity of the writings:

He continued to serve Jinvani without breaking a sweat even though he was financially unstable. He used to say “मरनो भलो विदेश में जहाँ न अपनों कोय ||”(It’s better to die in a foreign land where no one knows us.)

No one could find out about his misfortunes even after benefitting from his daily lectures and bhajans. One night, he departed for Jaipur with his wife, two sons and one daughter without anyone’s knowledge in the town. They stayed in dharmshala remaining hungry for two days.

Pandit Bhaachand Ji was going for labor to earn money. On the way, he went to Jin mandir to worship. The lectures were going on in the temple. He sat there and forgot all his miseries. After lectures, people were singing stuti “साँची तो गंगा है वीतराग वाणी” but no one was able to recite the full stuti. Pandit Ji then recited his own stuti in the assembly.

People asked him, “Where have you learned this poem written by Poet Bhaagchand Ji?”. He introduced himself saying, “कर्मो का मारा भागचंद मैं ही हूँ”(I am that Bhaagchand hit by karma).

People collected information and got to know that Pandit Ji and his family are in adversity. So, people told him to stay in their village only. They offered Pandit Ji to give lectures and they will take care of his livelihood. That time Pandit Bhaagchand Ji said, “आज लक्ष्मी रूठी है, माँ सरस्वती नहीं | यदि सरस्वती को भी आजीविका का अंग बनाया तो माँ जिनवाणी भी रूठ जायेगी | और उसके बिना भागचंद जियेगा भी कैसे ?” (Today goddess Laxmi has parted, not goddess Saraswati. If I make Saraswati means of my livelihood, Jinvani will also sulk away from me. Then, how will Bhaagchand live? I can never make religion a way of my earnings.)

Listening to these words of Pandit Ji, people felt special glory for him and Jain religion. The localites helped him to start a merchant shop.