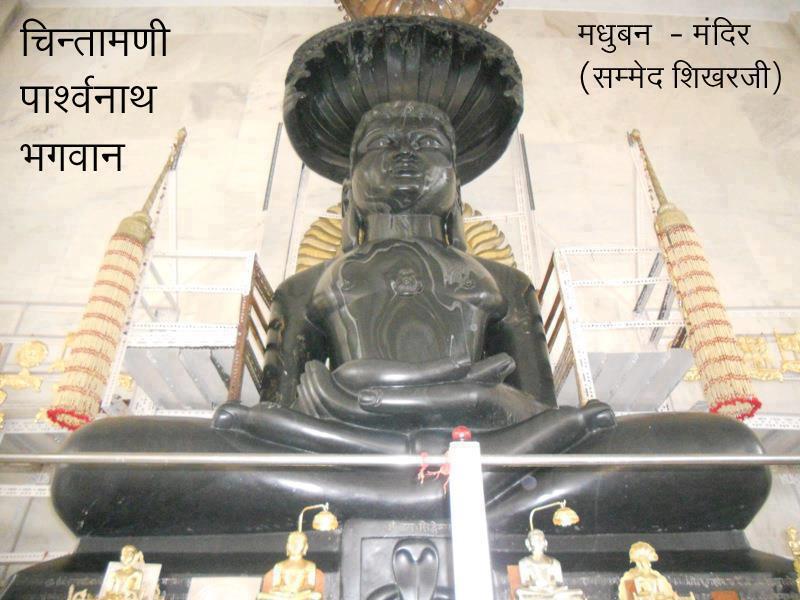 Lord Parshvanath is the 23rd Tirthankara of the present chobisi(चौबीसी ).

Child Parshvanath was born in Kashi (Varanasi, now) on posh krishna ekadashi (पौष कृष्णा एकादशी ). His father was king AsvaSen(अश्वसेन) and mother was queen Vamadevi(वामादेवी ). His birth was celebrated not only by the town people but Indra and Narendra from heaven.

Prince Parshvanath was impressive and extraordinarily intelligent since childhood. Although he had every kind of glory, yet he was not slightly attracted to them. His parents urged him to marry but he decided to remain celibate throughout his life.

The incident that caused his detachment from the world(वैराग्य प्रसंग):

Once he was traveling with his friends. In the path, he saw his grandfather doing Panchagni tap(पंचाग्नि तप). A pair of snakes was also burning in the lighted woods. Parshvanath detected this with his AvadhiGyan(अवधिज्ञान) and denied him to burn the woods. But no one believed him until they broke the wood into pieces and saw half burned snakes.

Parshvanath addressed them with mantras and they became Dharnendra-Padmavati(धरणेन्द्र -पद्मावती) in heaven because of dying with low Kashaya(मंद कषाय). This heart-rending incident made Parshvanath detach from the world. He took Diksha and became a saint on Posh Krishna Ekadashi(पौष कृष्णा एकादशी).

Once he was meditating in the Ahi area(अहि क्षेत्र). His previous birth enemy named Samvar Dev(संवर देव) was passing from the above. On seeing saint Parshwanath, he remembered his previous enmity and started troubling him by showering heavy rains, hailstones, stones, and thunderstorms. But Parshvanath continued his soul-practice. During this, Dharnendra-Padmavati took the form of a large snake and tried to protect saint Parshwanath. That’s why some idols of Lord Parshvanath have serpants on the head. However, Parshvanath was already been safe by his own soul-practice.

Parshvanath attained supreme knowledge(केवलज्ञान ) on Chaitra Krishna Ekadashi(चैत्र कृष्णा एकादशी ). After attaining Kevalgyan, the Samvar Dev apologized for his deeds. Lord Parshvanath along with his samosaran(समवसरण ) moved in the entire Bharat for 70 years and gave his preachings in the form of Divyadhwani(दिव्यध्वनि ).

P.S.: This is a brief of parshvanath’s story taken from [Vitrag Vigyan Pathmala-2](http://www.atmadharma.com/shastras/vitraagvignaanpathmala2_hin_txt.pdf). To read the full story of parshvanath, please refer to chobis tirthankar mahapuran.

This Story was originally written as [an answer on Quora](https://www.quora.com/What-is-the-complete-story-of-Lord-Parasnath/answer/Divya-Goyal-50).